The flowchart is a visual representation of your story. Every node represents a statement in your story. The first node is the story object, the next level of nodes are acts, the next are scenes, and each scene has its statements below it. It is still in its beginning stages, and is nowhere near finished. The aim of having a flowchart in PSE is to allow the you to visually see how your story flows. It allows you to see which places have more “substance” than others. 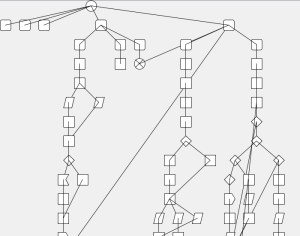 Flowchart prototype of a story.

The edges (connecting lines) are currently not organized, and therefore it looks very ugly in its current state.

Previously, event statements could only take a single value/variable. Now, they can take multiple values separated by commas. 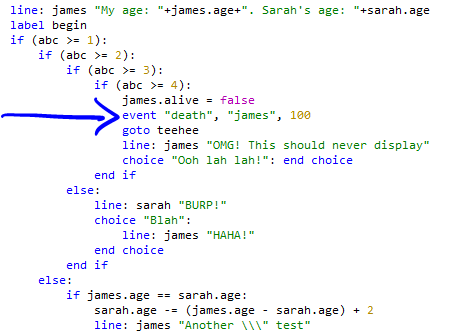 An event that sends multiple values when it is triggered.

Only story.name can be used outside of a scene-block. For example, you can initialize a variable to the name of the story, but you cannot initialize it to scene.name because there is no current scene.

Example of internal variables being used.